Sheikh Mohammed’s headline-grabbing divorce settlement and custody battle has played out in British courts over the past year.

Queen Elizabeth II first visited the UAE as monarch in 1979, while Prince Charles’ last visit was in 2016.

The former British protectorate is a magnet for British nationals, whose culture permeates nearly every aspect of expatriate life in this country of more than 9 million, where foreigners comprise around 90% of the population.

There are more than 100,000 British citizens living in the UAE and more than 6,000 British companies operating in the country, according to the British Business Group in Dubai and Northern Emirates. 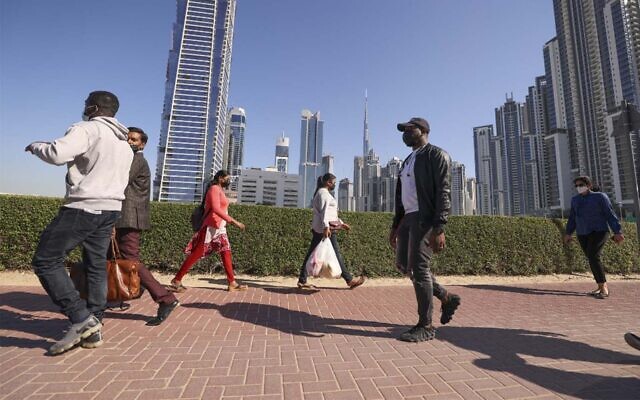 Employees walk to work on the first working Friday in the Gulf Emirate of Dubai, on January 7, 2022. (Karim Sahib/AFP)

The Duke of Cambridge’s visit coincides with the UK’s national day at Expo 2020, the world’s fair taking place in Dubai. Prince William is expected to visit the UK pavilion and tour the $7 billion grounds of the Expo site, where he will discuss the importance of conservation efforts with young Emiratis, officials and conservationists.

One initiative close to Prince William’s heart is United for Wildlife, established in 2014 by the duke to help facilitate efforts to counter the trade in illegal wildlife.

Prince William, who is traveling without his wife, Catherine, also will use his time in Dubai to draw attention to The Earthshot Prize.

This year’s award ceremony will be held in the United States. Last year’s finalists will showcase their innovative solutions to an audience at Expo following a speech by the duke.

Among the founding funding partners to the prize is Dubai-based global ports operator DP World, in partnership with Dubai Expo 2020.

The duke, like his father Prince Charles, has long used his platform to advocate for greater environmental awareness, warning that the Earth is at a tipping point and facing irreparable damage unless action is taken to repair the planet. 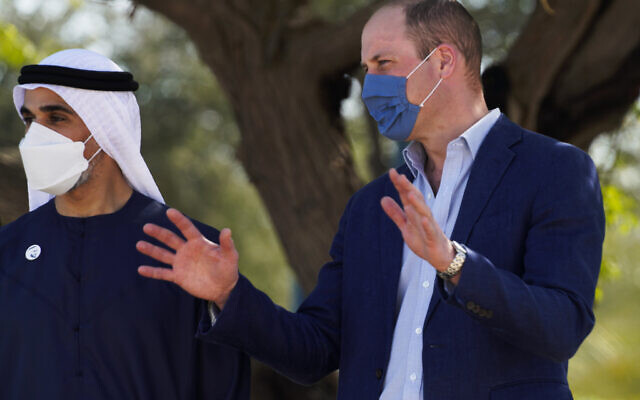 He started his tour in the UAE with a visit to Abu Dhabi’s Jubail Mangrove Park to learn more about the emirate’s local conservation efforts.

The Duke of Cambridge is also expected to meet with UK sports figures as the Queen’s Baton Relay makes it way around Dubai’s Expo site to pavilions of countries in the Commonwealth — mostly territories with former colonial ties to Britain.

The baton contains a message from Queen Elizabeth and travels to all all 72 nations and territories ahead of the Commonwealth Games.

Katy Holmes, general manager of the British Business Group in Dubai, said Britons are really excited about the prince’s visit because it sends a positive message about strengthening a bilateral relationship so well established by Queen Elizabeth II, who marked 70 years on the throne Sunday.

“He’s very well regarded as a royal and he is the future of the UK monarchy, so I think there’s interest from that perspective. But it’s also a celebration of Expo,” said Holmes, who is among those invited to attend an evening performance at Expo that will be attended by Prince William.

The territories of the UAE have attracted British attention since the early 18th Century, when the area was seen as part of a strategic Persian Gulf trade route with links to India and other British colonies. The territories, ruled by various tribal sheikhs, later became a British protectorate and remained so for 150 years until the founding of the United Arab Emirates in 1971.

Oil wealth helped rapidly transform Abu Dhabi’s and Dubai’s humid coastlines into a head-turning metropolis of skyscrapers and endless five-star hotels. South Asian migrant workers have borne the brunt of building and paving the UAE’s cities from the desert up. British nationals, however, have largely enjoyed the higher pay, warmer winters, lower tax rates and luxury living conditions afforded to Western expatriates in the Gulf.

British accents dominate English-language radio broadcasts and British pub culture is popular in Dubai. In a rare move, the UAE granted citizenship to Sir Tim Clark, the British president of the long-haul carrier Emirates, who helped grow the Dubai-based airline into a globally recognized brand.

*Guildhall is an industry leading headhunting firm. Recently voted the best HR Consultancy and the Best retained search firm in the UAE, we provide high calibre, best in class and bleeding edge recruitment services to the top organisations across the region.

Turkish President Tayyip Erdogan arrived in the United Arab Emirates on Monday as the countries pivot toward economic cooperation with a flurry of agreements during his first visit to the Gulf state since 2013.

DUBAI—Saudi Arabia transferred shares worth about $80 billion in oil giant Aramco to its wealth fund as part of efforts to diversify the kingdom’s hydrocarbon-dependent economy. The transfer of a 4% stake in state-owned Saudi Arabian Oil Co. , known as Aramco, will support the Public Investment Fund’s plan to grow its assets under management…